This is a real 2019 Fantasy Football Draft I took part in on Tuesday. I've been in this league since 2007. I won the championship last year, which is why I'm drafting 12th.

This league has standard scoring, starting two running backs, two receivers and a flex. This league also has a one-player keeper corresponding to the right before they were drafted. That's how I was able to get Patrick Mahomes in the 10th round. Here are the keepers in this league: 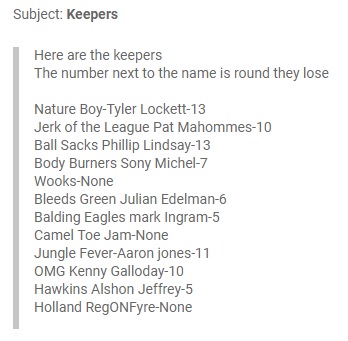 Outside of my keeper, the best values on this list are Tyler Lockett, Phillip Lindsay and Aaron Jones. The two worst values are Alshon Jeffery and Julian Edelman.

At any rate, here's the draft:

MY PICKS, ROUNDS 1-2: I thought for a second that Nick Chubb would fall to me at the bottom of Round 1, but that didn't happen. I then wanted Tyreek Hill to pair with Patrick Mahomes, but Body Burner is one of the best drafters in this league - I beat him in the finals last year - so he snatched Hill away from me.

Leonard Fournette and Julio Jones are a nice tandem. I recommend drafting as many running backs and receivers as possible, given how thin those positions are.

BEST PICKS, ROUNDS 1-2: Chubb and Hill are my favorite picks, if you didn't guess.

WORST PICKS, ROUNDS 1-2: Ezekiel Elliott is too great of a risk at No. 3, and the other running backs around that area are just as good, so he's not worth it. James Conner at No. 5 was a worse pick, as he's just not as talented as the other 11 players in the opening round. He was chosen too early.

Antonio Brown was the worst pick in these two rounds. He could easily quit on his new team when the Raiders begin 2-7 or so.

MY PICKS, ROUNDS 3-4: Another running back-receiver tandem. I'm happy to pair my top two backs and receivers with Mahomes.

BEST PICKS, ROUNDS 3-4: I was oping for Stefon Diggs and David Montgomery, but the two guys who had the best picks in Rounds 1-2 stole my preferred players again. Adam Thielen and Devonta Freeman also provided great value for when they were chosen.

WORST PICKS, ROUNDS 3-4: LeSean McCoy in Round 3 is nuts. McCoy may not be the starting running back in Buffalo for very long, and he looked done last year.

WalterFootball.com is part of the NESN digital network.